IF YOU’RE LOOKING FOR THE FALL 2015 YASH, GO HERE: http://www.lorimlee.com/its-time-for-the-2015-fall-ya-scavenger-hunt/

UPDATE: Contest has ended. Winners announced on the YASH blog on April 10.

HELLO! I’m Lori, your hostess for this stop on the YA Scavenger Hunt! Take a look around or lie back and rest your weary scavenger-hunting limbs. It’s okay. I’ll wait 🙂

A little about me:

• I love cheese.
• I believe in magic.
• I’m obsessed with unicorns.
• I have twelve fingers. (This is a lie. I just wanted to see if you’re paying attention 😀 )

If you’d like to find out more about the hunt, see links to all the authors participating, and see the full list of prizes up for grabs, go to the YA Scavenger Hunt page.

Looking for my exclusive bonus content? Somewhere on this leg of the hunt, I’ve hidden a sneak peek at Kai’s future in the Gates of Thread and Stone series. When you find it, pop back here to enter the EXTRA giveaway listed below. But before you go looking for it, check out the amazing author I’m hosting.

Directions: Below, you’ll notice that I’ve listed my favorite number. Collect the favorite numbers of all the authors on Team Teal, and then add them up (don’t worry, you can use a calculator!).

Entry Form: Once you’ve added up all the numbers, make sure you fill out the form here to officially qualify for the grand prize. Only entries that have the correct number will qualify.

Rules: Open internationally, anyone below the age of 18 should have a parent or guardian’s permission to enter. To be eligible for the grand prize, you must submit the completed entry form by April 5, at noon Pacific Time. Entries sent without the correct number or without contact information will not be considered.

I’m super excited to be hosting 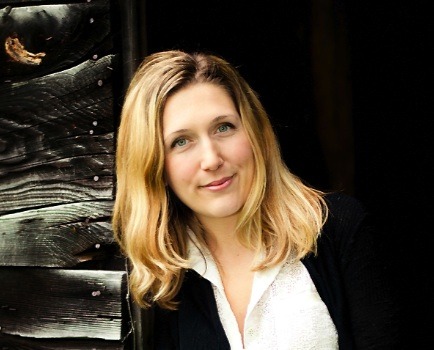 Page Morgan is the author of the YA Gothic thriller THE BEAUTIFUL & THE CURSED, its sequel THE LOVELY & THE LOST, and the upcoming THE WONDROUS & THE WICKED. She’s been intrigued by les grotesques ever since she came across an old, black-and-white photograph of a Notre Dame gargoyle keeping watch over the city of Paris. She wanted to tell that gargoyle’s story. Soon, the idea for The Dispossessed series was born.

She lives in New England with her husband and their three daughters, an English Pointer puppy, an arrogant cat, two cuddly bearded dragons, a bunch of chickens, and during the summer and fall, their neighbor’s two sweet horses.

(Lori here. I daresay Page might have more than 12 animals! That’s quite the happy home!)

Since the Waverlys arrived in Paris, the streets have grown more fearsome by the day. As Ingrid learns to master her lectrux gift, she must watch Axia’s power grow strong enough to extend beyond her Underneath hive. By all indications, the fallen angel’s Harvest is near–and the timing couldn’t be worse.

Targeted by vengeful gargoyles, Gabby has been exiled to London for her own protection. Meanwhile, the gargoyle castes are in disarray, divided between those who want Luc to lead them and those who resent him and his fondness for humans. The Alliance is crumbling from the inside as well, its members turning against one another, and possibly against the Waverlys, too.

Axia has promised that the world will burn. An now, unable to trust the Alliance, separated from Luc, Gabby, and her twin, Grayson, Ingrid is left to face the demon uprising alone.

(Check out this deleted scene from the beginning of Chapter 14 of THE WONDROUS AND THE WICKED!)

Luc didn’t mind being alone. It was just how things were. How they’d always been, and he’d become used to living a solitary life. So sitting on a cold iron park bench in the middle of the Luxembourg Gardens, watching as human couples strolled by arm-in-arm, shouldn’t have caused his chest to ache the way it did. Or wish that someone could be warming his side on the bench next to him. Not just someone. Ingrid.

She had changed everything, and Luc still didn’t know what to do about it.

He’d needed to get away from common grounds for a little while, but he hadn’t wanted to go far, so he’d stayed within view of the arcades. Even though it was dangerous for her, he knew Ingrid would be coming back. The reckless part of him wanted her to come back. Luc wanted her to come up to his rooms and he wanted to keep her there. She could have the guest room, the one with the four-poster bed, and then he would be able to scent her again. He could protect her and love her, and even though his limitations would be torturous, he could stay beside her every night while she slept.

He sat back, felt the cold bench through his thin coat, and forced his imagination to stop. Imagining that he might be able to keep a favored human on gargoyle common grounds was a waste of time.

A tall figure walking through the snowy lawns toward the arcades split through Luc’s thoughts. He stood up and after a long sigh, started down the footpath for his territory. What the hell did Vander Burke want here? Besides Ingrid’s father, Lord Brickton, the Seer was quite possibly Luc’s least favorite human, and for obvious reasons.

As Vander passed through the arcades, Luc sensed a human crossing onto his territory. It was nothing like the bond Luc had formed with his human charges at the abbey. Vander was a visitor, nothing more, so Luc received only a glimmer of awareness and no scent—scents only accompanied true human charges. The Seer was nervous about something and annoyed. And intimidated. Luc smiled as he entered the courtyard behind Vander, who stood by the fountain. The nine-headed Hydra waterspout had been reduced by one head, which lay cracked off and pitted in the dry basin.

The crust of snow over the courtyard gravel cracked loudly under Luc’s feet and Vander turned. Luc had let his private smile drop and now glared at his unwanted visitor.

“Alliance are not welcome here, you know that,” Luc said.

“I wouldn’t have come if it wasn’t important. Are you the only Dispossessed present?” he asked.

Luc nodded. “For now.” There had been many gargoyles that had come and gone since dawn, and he had heard all about the Alliance girl’s failed attempt on Yann’s life.

“Good. I need to ask something of you,” Vander said.

“If it has anything to do with what your Alliance huntress attempted last night, my answer is no.”

Luc walked around the opposite rim of the fountain, toward the ballroom doors. Vander intersected him.

“This isn’t about Chelle. It’s about the Directorate representative and the emergency envoy of troops that are arriving today.”

Luc had heard a rumor about the additional hunters coming to Paris. “What about them?”

“I want you to stop them,” he finally said, though it was practically a whisper.

Luc was suddenly no longer bored or annoyed. He peered at the Seer. “Stop them?”

“You have the numbers, Luc, I don’t. The Dogs, the Wolves, the Snakes…there must be dozens of you. Close to a hundred or more.” Vander took a breath. “When the troops find out I’m not going to help them, I don’t know what they’ll do to me.”

“I imagine they’ll skip to the part where they kill you,” Luc offered. Vander didn’t flinch.

“I imagine they will.”

“Well, didn’t you join a lovely coalition?” Luc turned back for the fountain. “You’re asking me to lead gargoyles against the Alliance, Seer. If I do that, we’ll be recognized as all-out enemies. The peace Lennier worked toward for hundreds of years will be destroyed.”

But then Vander found the weakness in Luc’s façade and cracked it open. “They’re going to kill Ingrid.”

Luc stared into the basin of the fountain, the fractured stone having allowed in veins of pale moss and withered brown weeds. That’s what the Alliance fighters were. Weeds that could be uprooted but would always come back. Luc knew Vander was right. The Directorate would keep trying to kill Ingrid—and the rest of the Dusters, now—until their reason for doing so was gone.

There was only one thing Luc knew with certainty. One truth he held with unwavering conviction. He was a gargoyle. He was on this earth to protect humans, and the only human Luc cared about more than his own existence needed him.

“You already know my answer,” he said to Vander, his back still turned.

“Thank you, Luc. You should know I’ve already told Ingrid to stay away from Hôtel Bastian, but she refused to leave Paris. I suggested she go to my uncle’s home in Vichy—”

“Get off my territory.”

He was finished being linked to Vander Burke.

Want to get your hands on this book? Me too! You can buy THE WONDROUS AND THE WICKED as well as the previous books in the series on Amazon ♥

Or sign up for her newsletter and never miss any important news or book updates.

Don’t forget to enter the contest for a chance to win a ton of signed books, including mine! Add up all the favorite numbers of the authors on Team Teal and you’ll have the secret code to enter for the grand prize!

To win a SIGNED copy of either Gates of Thread and Stone or The Infinite, leave a comment and answer the following question: What do you like about fantasy?

(Note: physical copy for US only. INT winner will receive a Kindle copy)

For one (1) extra point, follow me on any social media platform. Please make sure to note where you followed me (and your corresponding username) in your comment so that I can count it!

Ready to move on to the next stop on the hunt? Then head on over to visit Kristi Helvig!